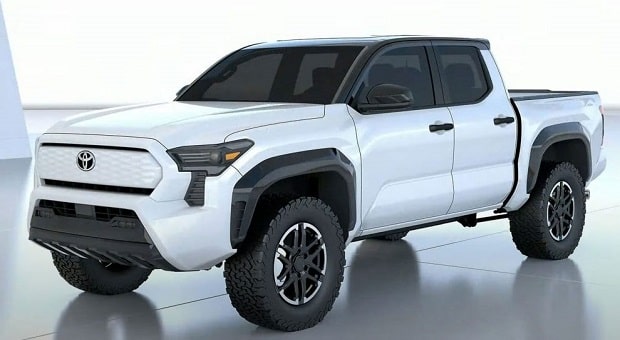 One of the most talked-about releases is the 2024 Toyota Tacoma. Partly because it is a much-needed design and the other part would be the potentially all-electric truck. Dubbed Toyota Tacoma Electric is supposed to completely replace its gas-guzzling siblings and take over the road as soon as 2024.

We don’t have the full report and specifications but here is what we know so far. The inside and outside of the truck have no reason to stray far from the next-generation Tacoma. We can expect that the fully electric version will look somewhat like the 2023 Toyota Tundra.

Toyota vowed they will introduce at least 30 EVs by 2030. This is a tall order but we are waiting to be corrected. This truck should be a part of the vehicle family called Beyond Zero. This might have to do with the zero-emissions plan for Toyota. They invested heavily in hydrogen fuel cells even though they are a bit late to the electric car race. It will have a body on frame construction. It is a mid-size truck competing against Chevy Colorado and Ford Ranger. Toyota will put coil springs instead of leaf springs in the new Tacoma.

There are several redesigns on the outside. Including the front grille headlights and bumpers. New Tacoma should have a turbocharged four-cylinder engine. We are suspecting it will be the new 2.4-liter engine that dishes out 275 horsepower with 375 pound-feet of torque that Lexus put in their NX350.

We are also hoping for a hybrid variant or an all-electric Tacoma truck. This means more space under the hood for cargo as all the batteries will be under the truck to improve center of gravity and driveability. We also have the TRD Pro version which is centered around the off-road. Its height is increased by 1.5 inches in the front and 0.5 in the back. We can also expect some good off-roading tires along with this truck.

We could ramble on about the best trucks right now and that is expected. But it all boils down to your needs and how you are planning to use the truck. Do you put more stock into the luxurious interior, or perhaps the utility of the truck itself? Hopefully, this list can help you decide which truck might be the best fit for you.