There is a new redesign coming our way, the 2024 Toyota Tacoma Hybrid is on the way. The most populated segment of pickups is getting richer every day. There were numerous redesigns already, and now the famous Tacoma is getting a touch-up. This is just in perfect time since most manufacturers are doing work on their creations. It looks almost like they forced Toyota’s hand and made them pull the trigger with this refresh. Tacoma is very popular, and a top seller. Toyota will look for a way to continue that streak going for as long as they can. It is interesting that Tacoma is outselling the domestic Chevy Colorado and Ford Ranger.

This is probably due to fantastic performance, longevity, and contemporary style. The redesign in question will give a better toolset to the already great Tacoma. The inside of the pickup should get better technology as well as modern styling. The exterior will mostly be the same, with some minor tweaks to modernize the look. The powertrain should remain the same, with some hybrid or EV updates. Let’s take a closer look at the upcoming Tacoma and what it will look like.

The new 2024 Toyota Tacoma Hybrid will get a lot of improvements on the inside. The seating arrangements are getting new upholstery with better cushioning. This will improve the ride quality and comfort, especially off the road.

Infotainment is a big touchscreen of 12 inches in size, the dashboard will be digital as well. Hands-free driving is probable since it is a modern pickup and everyone is raving about this feature. Moonroof and ambient lighting are standard at this point. 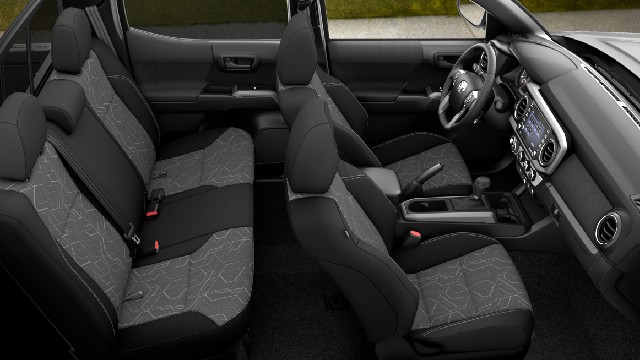 The exterior of the new 2024 Toyota Tacoma Hybrid is looking aggressive still. The off-roader will look menacing while tackling obstacles. It does come with under armor to protect its bottom and the ride height is increased.

Bumpers are prominent and come with hook and winch capability. Wheel rims are 19 inches and are lightweight. This does help to shave off some weight and improve power to weight ratio. By doing that, designers made it lighter and gave it better fuel economy and superior handling. 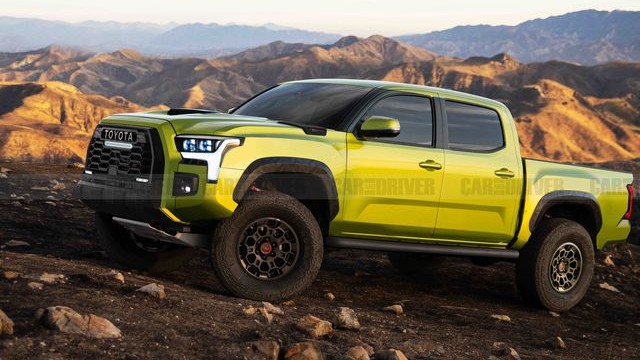 The fresh 2024 Toyota Tacoma Hybrid is not very innovative with the powertrain lineup this time around. This does come as a surprise because a lot of rumors were made and people expected big moves in this department. However, there will be a brand new architecture, the famous TNGA-F platform for the Tacoma Hybrid. This architecture brings a body-on-frame design and this is the same one used on the big cousin Tundra. Sequoia is also going to have that type of platform, and the 4Runner. Some of the big manufacturers that use the said platform include Land Rover, Lexus, Hilux, and others. This will surely bring many benefits to Tacoma as it has proved very valuable to those manufacturers.

A new powertrain is almost sure to happen for Tacoma. Currently, the mid-size pickup has a manual transmission, and it is the only one on the market. Hopefully, that will remain the case and we still get more control over our gear shifting. But the gearbox itself seems ancient when compared to modern solutions that come with rivals like Canyon, Frontier, and such. The previous Tacoma sported a four-cylinder engine that is quite basic and much weaker than other V6s that the competition has. It is expected that Toyota will put a new four-cylinder with a turbocharger in the upcoming Tacoma. The 2.4-liter engine is the same one that Lexus NX350 uses. Which is good, because that pickup can tow and haul and then some.

It has 275 horsepower and 320 pound-feet of torque. It should arrive with eight gear automatic shifter. But as Tundra has a hybrid engine, it should come as no surprise if the Tacoma comes with one as well. We are all aware of the upsides of hybridization. It will improve performance and give better mileage. This is something everyone wants in their pickup. It will still be body-on-frame construction, but the leaf springs in the back should be removed. Toyota will replace them with a modern coil-spring system that will improve handling and the ride itself. The hybrid powertrain should be a 3.4-liter engine V6.

It should be able to produce 390 horsepower which is more than enough to move the mid-size pickup around. Even in more difficult terrains. However, this does come with a six-speed manual and a 10-speed automatic transmission. Both rear-wheel and all-wheel drive are available which is a big plus. There is also news about an upcoming EV Tacoma. This is announced several times by Toyota and the Tacoma EV is looking like it is just a matter of time. It should come with a dual-motor setup. There are some trucks with more electric motors, but the dual motor setup seems to be a good fit. There will still be a dual cab and crew cab for all Tacomas. Diesel engines are becoming obsolete and the Tacoma will have none on offer. This isn’t such a surprise since the new regulations are coming to power.

The upcoming 2024 Toyota Tacoma Hybrid will have decent mileage when compared to fierce opposition in the same category. It gets 20 mpg in the city and 23 on the highway. But the hybrid version should be able to achieve 38 mpg which is impressive for a pickup.