Ford is once again blessing fans with a new truck, this time around it is the 2023 Ford F-150 Tremor. We can expect a certain amount of innovation and novelties in the Tremor. It will be heavily influenced by its off-roading pedigree and the F-150 line of course. But Ford will make moves and changes to turn this truck into something special and noteworthy.

It will be interesting to see what kind of improvements in the quality of life we get. Especially since it is an off-roader. Air suspension, higher ride, better skid plates and bumpers, special tires and wheels, maybe more comfortable seats. A lot of things come to mind when we think about improvements, but what did spring to Ford’s mind.

Most of the changes will be in the cabin and the things we don’t see, like suspension for example. Powertrains will also be interesting to see, will there be a hybrid version, who knows. Keep reading to find out more about the upcoming 2023 Ford F-150 Tremor and all the things that make it special. 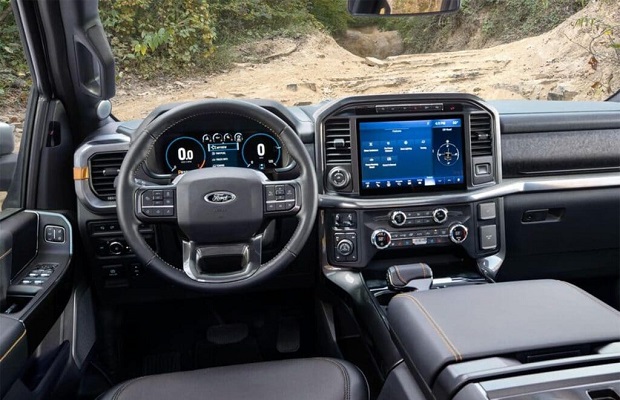 Let’s start with the cabin of the 2023 Ford F-150 Tremor. Ford announced they are improving the interior of the truck and we are hoping they deliver. So what changed exactly and what didn’t need changing in the first place. It is an off-roader so we can expect a sporty look, and sporty did we get.

There are a lot of buttons on the steering wheel, which are not made of cheap plastic. The new cushioning is here to make the steering more comfortable even after long working hours. The new 2023 Ford Tremor doesn’t have paddle shifters on the sides which is a shame, off the road it would be good to have both hands available for steering, and adding paddles on the side of the steering wheel would allow that. 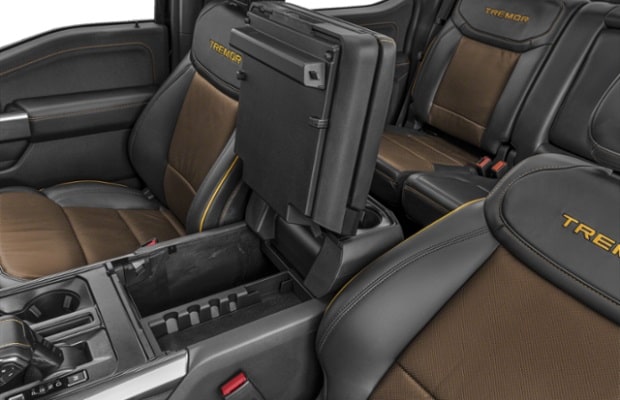 There are a lot of chrome accents along with the cabin. This adds to the luxury and upper-class feel, which is something you don’t expect in an off-roading truck. There is a huge armrest between the driver and passenger seats. A central infotainment system can be found in the middle of the car. It is a 12-inch digital touchscreen. From here you can control everything that is connected to the battery including top-of-the-line stereo and air conditioning.

The seats are suede and fabric for now. It wouldn’t be a great idea to put leather in an off-roader because of how sticky it can get after a while. Plus the seats are ventilated and heated which adds to the comfort and exclusivity of the truck itself. It is always nice to add a panoramic roof to a truck that will spend a lot of time in nature. But the jury is still out on that one. The 2023 Ford F-150 Tremor can seat five people comfortably and with legroom to spare. The dashboard is digital which is a nice step towards the future and we welcome it. 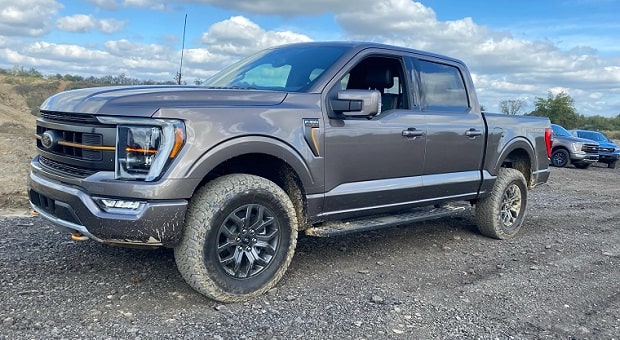 On the outside, the 2023 Ford F-150 Tremor is borrowing a lot from the F-150 line of trucks. It is not a blocky truck but an aerodynamic pickup that looks stylish and dashing. Its dimensions are big so is the cargo bed, after all, it is a working horse made for the outdoors. The wheels are huge, 33 inches in size. Most of it is due to its beefy tires which are tailor-made for the off-road. Also, the wheel rims are made from lightweight materials.

Big trucks can use tricks like these to shave off some weight and improve their performance by improving power to weight ratio. The front grille is huge, which is nothing new for Big Blue Oval. This improves air circulation and keeps things cool under the hood. Not that there were any problems with overheating but you can never be sure. Especially in an environment that is full of dirt and dust, also there are special filters on the grille to ensure nothing but clean air gets inside.

Headlights are still the same, the latest LED technology is used on those. What fans would probably like to see is a LED bar on top of the car to improve visibility during night hours, especially since things are dark off the road and there is no street light.

The overall look of the truck is a sporty gargantuan that will get the job done. 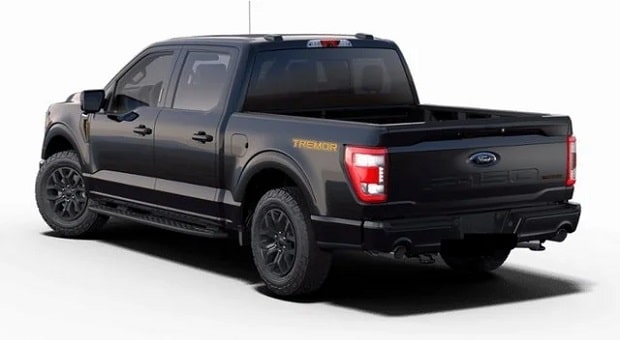 The same engine will be used in the Tremor as before. The 2023 Ford F-150 Tremor will be using the same engine from Raptor, which is good news since that engine is a proven beast.

When compared to Raptor, the Tremor can haul 445 pounds more and tow 2700 pounds extra. It is still uncertain if we will be getting a hybrid version of the Tremor.

It could be in the works since more and more manufacturers are blessing their trucks with battery packs instead of engines.

Starting price for the 2023 Ford F-150 Tremor will be around $ 50.000. If you choose some extra amenities or opt for a stronger engine the price will shoot through the roof.

We can expect to see the truck on the road as early as the fourth quarter of 2022. Hopefully, dates don’t get pushed back due to a raging pandemic.