Another pickup is getting updated; get ready for the fresh 2024 Toyota Tundra. It is one of the best-selling pickups of all time. This is obviously for a good reason, and nothing is gifted to the mighty Tundra. It has been over two decades since the first Tundra truck roared on the paved road. Since then, Toyota has only updated it with good features. No wonder it is still one of the most sought-after pickups. There are many new pickups on the market from various manufacturers. This will force Toyota’s hand to update the Tundra and make it even better. This won’t be hard to do since it’s about time that some things get fixed.

Other manufacturers are getting their flagship pickups updated quicker. So, Toyota has to follow suit. We will most likely see an updated interior. More stylish is the way to go; we all know that pickups have gone so far with the cabin design. On the outside, not many changes will happen. The truck will look similar. But the powertrain is a big question mark. We are still hoping to get a diesel version, in spite of new emission regulations. There is also talk of electrifying the Tundra, but this could just be a rumor. Let’s take a closer look at the new Tundra.

The dashboard should be digital as well, which would enable better customization for tracking information. There are some other amenities, such as heated and ventilated seats, a heated steering wheel, a moonroof, and similar ones. 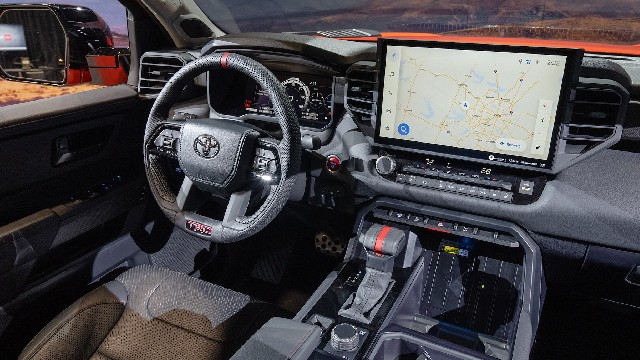 The exterior of the 2024 Toyota Tundra will resemble its predecessor. It will still sport a sturdy and aggressive look. Tall ride height and big 18-inch wheel rims There is an option for bigger ones, and they are lightweight to improve the power-to-weight ratio.

Cargo beds can range in length from 5.5 to 6.5 feet. There is a multifunctional tailgate with newly designed tail lights. On the front, the fascia is large and aluminum. It has sharp-looking headlights with some extra LEDs on top of the pickup. Bumpers are prominent and give it a more maddening look. 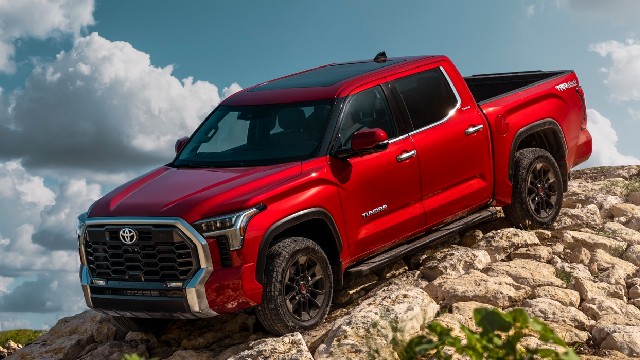 The powertrain department is going to have some well-known stars under the hood of the 2024 Toyota Tundra. The big pickup is still going to continue production with internal combustion engines for now. So that is good news for those who like a good twin-turbo V6. This is the only engine under the hood. But it does come with several different outputs. The lowest and weakest trim would be the SR trim. The V6 under this trim can produce over 350 horsepower and 400 pound-feet of torque. For a big pickup, this can be enough, but we obviously would have preferred more. There is also a 390-horsepower version with 480 pound-feet of torque. This engine has a bit more power and is more popular than the previous one. But we have our eyes on the most powerful version of the engine.

This is a hybrid system, which works with a smaller electric motor. By adding a small electric motor, Toyota equipped the Tundra with a more reliable and better-performing engine. This can produce 435 horsepower and 580 pound-feet of torque. The extra wheel spinners will come in handy off the paved road. Considering the Tundra might do some heavy lifting, this engine is going to be worth the money. Driving on difficult terrain can be tough, but this engine version should make it easier on both the driver and the pickup. This goes especially for snow, mud, and sand. Tundra is built with a bit of off-roading spirit. It has a lot of tools that point in that direction and that make its life easier on the wild path. It is not slow either; it can reach 60 mph in just 5.6 seconds.

This truck can weigh up to 12000 pounds. Now, to the bad news. Unfortunately, there will be no diesel version of the 2024 Toyota Tundra. This is probably due to new emission regulations, which are getting stricter. Every manufacturer is racing to go green with their whole fleet, and we believe Toyota is headed there as well. Diesel engines would be a godsend, especially for off-roading pickups like the Tundra. It would be more powerful and have much better torque. But now it is just a dream. There is no electrification happening this time around. But we believe it is the future plan of Toyota. A big battery of, say, 150 kWh should be enough to give it good range and power to match the output of the top V6 version. We will have to wait and see what rolls off the production line next time. 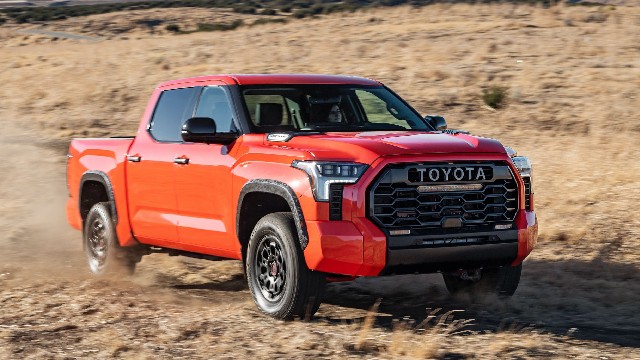 Fuel economy for the 2024 Toyota Tundra could be better if we are being honest. The gargantuan pickup gets 18 mpg in the city and 25 on the highway. The hybrid version obviously gets the best mileage of all three trims. It’d be interesting to see if they added a more powerful electric motor and the numbers improved even more.

The fresh 2024 Toyota Tundra will arrive later in 2023, probably in the fall of the upcoming year. The price will depend on the trim you choose. The cheapest Tundra will cost around $37,000, while the most expensive version, the Capstone, will cost $80,000.