Another refresh is coming up, it is the 2024 Chevy Colorado. We are getting a mid-cycle refresh by Chevy. This is not a total surprise as most manufacturers are frequently updating their creations. It has been about eight years since Colorado was brought back from the dead. This mid-size pickup is in for a rumble. There are a lot of fine trucks in this segment. All of them are refreshed and ready to showcase what they can do. We will have to see whether Colorado has what it takes to run with the big boys. This would mark its 3rd generation of pickups.

What kind of changes we can expect, remains to be seen. Nothing drastic is the probable outcome. So the interior will be restyled a bit. Modernization and technology could be improved. On the outside, some small adjustments are to be made. Perhaps giving it a toolset to better handle the off-road. Under the hood is where most changes might happen. Electrification is due to happen. The question is simply when will it happen. We see good fortune ahead for Colorado. Let’s read more about the details that surround this refresh.

On the inside we expect Colorado to look contemporary and spacious. This is a full four doors build and can seat five people comfortably. Plenty of legroom and headroom due to designers doing a good job and placing everything properly. Seating is nothing out of the ordinary. We get leather, fabric, and suede for upholstery material. There is contrasting stitching for some extra style points. Whether multiple colors are available remains to be seen.

We get a central infotainment system of 11 inches in size. This is enough for the back row to enjoy the fun as well. It controls everything connected to the battery. The instrument panel does look a bit empty. But we also get some chrome accents along the panel so it looks luxurious a bit. The dashboard is digital and this allows for better customization. You can track everything you want and this affects the safety aspect in a positive manner.

Buttons are present on the steering wheel which keeps the driver focused in front. We get standard features like front collision alert, lane departure alert, automatic brakes, cameras all around for easier parking, and many more. It remains to be seen whether we get hands-free driving. This is a very popular feature and is available at Ford and GM. Hopefully, we get more than 200 000 miles of pre-mapped roads. 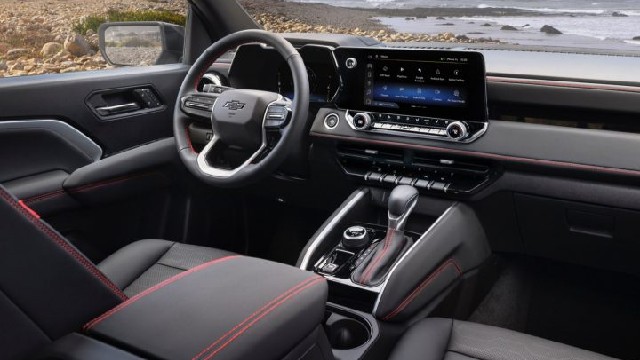 Trail Boss is now an official trim for the 2024 Chevy Colorado. It has a wider front and 9.4 inches of ground clearance. We get 18-inch lightweight rims with 32-inch Goodyear Territory AT tires. It is a rugged pickup and ready to take on off-road. Bumpers are prominent and colored differently. Front and rear electronic locking differential.

Underneath the pickup, we have protective skids and under armor to make sure you can ride over pretty much anything. Multimatic Dynamic Suspension Spool Valve dampers are available. This time around they are outside the frame. Some trims also feature a roof-mounted light bed and underbody camera. The pickup looks much more aggressive and it is a look we can get on board with. 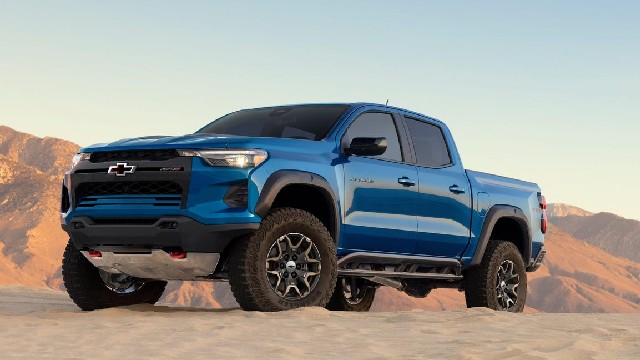 Diesel engines aren’t that common on the North American market. But the old Colorado was one of only three pickups to have that type of powertrain. The 2024 Chevy Colorado is about to change that trend. It will be using a 2.7-liter turbo-four engine. This engine has an eight-speed automatic transmission. Trim levels are what dictate how much power this beast can produce. We have base WT trim and LT trim that have a mere 237 horsepower and 259 pound-feet of torque. It has a good towing capacity as well at 3500 pounds.

We have the Z71 trim and the brand new trim called Trail Boss with 310 horsepower and 390 pound-feet of torque. This comes with 7700 pounds and is the highest in the mid-size category of pickups. There is also ZR2 that has the same number of horses as the previous two but with more torque. It can spin the wheels with a force of 430 pound-feet of torque. If our math is correct, and we believe it is, the ZR2 has 121 horsepower more than the diesel engine and 61 pound-feet of torque as well. All of the trims can get the most powerful engine option which is nice. Although at the start of production the number of those engines was limited. So get them while they are available.

There are no hybrid options announced, nor a fully electric pickup. This comes as a bit of a surprise. Most manufacturers are racing to put a battery pack to their pickups and here we have a gas-guzzling Colorado. Perhaps they haven’t figured out all the kinks for that type of build. But hopefully it comes sooner than later. Electric vehicles are all the rage at the moment. And by delaying electrification, Chevy can only lose a big share of the market. And it sounds like they don’t want that to happen. 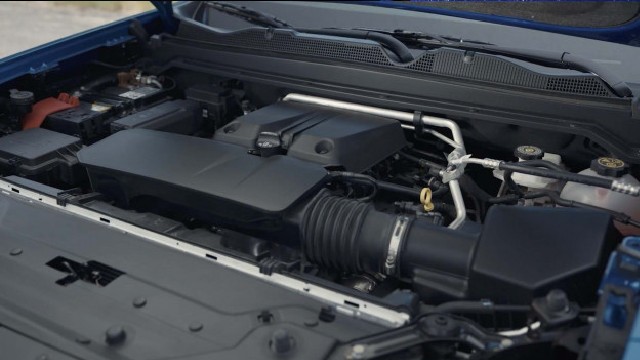 The 2.7-liter engine powering the 2024 Chevy Colorado has decent fuel consumption. It gets 19 mpg in the city and 25 mpg on the open road. Interestingly enough, a 2.7-liter turbocharged engine can drop the active cylinder count to 2 while possibly decreasing the amount of fuel it needs to run. This engine also has stop/start technology which comes in handy while driving in heavy traffic.

Production will start in the first half of 2023 which puts the release date at mid-2023. This isn’t too far away so let’s hope nothing delays it. The price is not set yet and we have to wait for an official announcement.