Chevy made the debut of the all-new Silverado 1500 early in the year and the next for the introduction is the new generation of the heavy-duty models. The new models will likely be one of the stars at the next Detroit Auto Show but Chevy showed the teaser image of the new front-end design.  The brand is also testing the new generation HD models and several configurations were caught by the spy camera. The one-ton 2020 Chevy Silverado 3500 HD was also spotted on several occasions while conducting towing tests and every time models were heavily camouflaged.

Chevy hasn’t revealed details about the new generation Silverado 3500 HD except shown the new face of the model. However, like it is the case with another brand’s the redesigned half-ton model gives us a good picture of what we should expect. So, Chevy will likely apply the similar recipe to the more capable versions with a few distinctions. The new one-ton Silverado will improve structurally and upgrade engine range. The new styling will also come with the next generation of the model as well as a more comfortable and techier interior. Chevy will also apply the new safety measures. 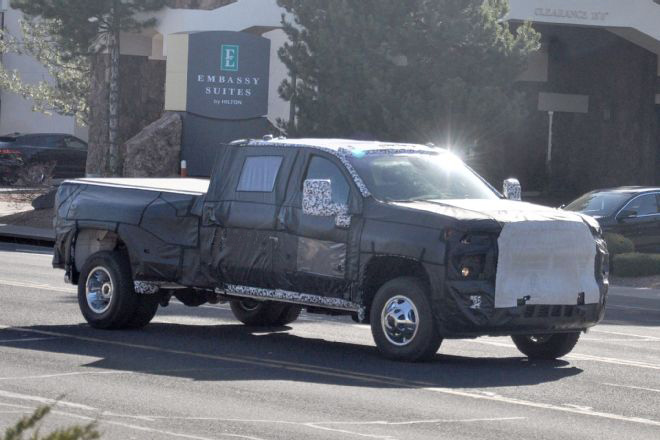 The new 2020 Chevy Silverado 3500 HD will go through the redesign from the ground up as the recently introduced light-duty Silverado did. The truck will enter to the next generation on the new, reinforced chassis with the more high-tensile steel incorporated in its structure for greater rigidity. The mixed-material strategy will also be used for body panels in order to leave several hundred pounds in the previous generation. The model will likely grow in size as well to provide more comfort inside and capacity but will lose around 450 pounds in the process.

The model will also make the transmission to the new generation with the sleeker and more modern styling. The similar styling cues as on the half-ton Silverado will appear on the larger and more capable HD models. Still, Chevy showed the picture of the new face of the new HD models with the new grille version with the Chevrolet lettering on the strip which divides the grille into two sections. The new Silverado 1500 has the bowtie badge on the grille and that could be one of the obvious distinctions between the light-duty and heavy-duty models.

The new Silverado HD will again return with three cab styles but the new version should provide more interior room thanks to the larger size. With that Chevy will also improve the quality of materials while design will follow the same pattern as the half-ton model.

The models will have the same design of the center stack with the new infotainment system available with the 7- and 8-inch screen sizes. The heavy-duty truck will also gain the new active safety systems. There will also be high-quality material options, heated and ventilated seats, premium sound system, unique styling and interior pieces and more. 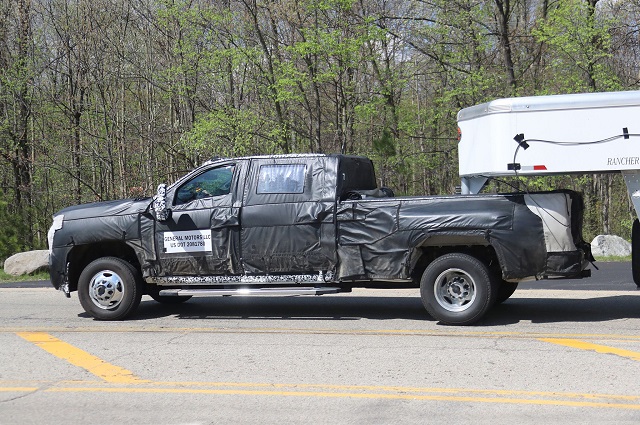 The new 2020 Chevy Silverado 3500 HD will improve its capability and efficiency thanks to the structural and weight-saving measurement. The engine range will also be the subject of upgrades but no exact details yet.

Some sources claim the return of the same engine range but with improved performance and fuel saving capability. Based on some reports Chevy might replace the 6.0-liter Vortec engine with the new V-8 unit with power around 400 hp and torque around 450 lb-ft. Chevy hasn’t commented on that. The current Vortec V-8 makes 365 hp and torque of 380 lb-ft.

The 6.6-liter Duramax Diesel eight-cylinder engine will again reside under the scooped hood and likely with slightly upgraded performance. The engine could gain higher torque thanks to the upgraded transmission system.

The Chevy 3500 will be available with the dual rear wheel setup and suspension upgrades. We will see the effect of the structural and other upgrades on model’s towing and payload capability.

The production of the 2020 Chevy Silverado 3500 HD will begin in the third quarter of 2019. The debut should be at the next Detroit Auto Show. The price will likely move slightly upward.