Another refresh is coming our way, the 2024 Ford Ranger is about to hit the road. Many manufacturers are doing mid-cycle refreshes all over. It is about time that America’s favorite truck did the same thing. It has been a while since the last redesign of the famed Ranger. We are probably in for more than just small restyle and minor tweaks. The cabin, although modern and rich with technology, needs an update. Ford is sitting safely on top of the market share when it comes to trucks. But the mid-size segment is getting more crowded with each day.

So it would make sense that now they feel the pressure. This lit the fire under them and made them hurry with this redesign. There are a lot of places where Ranger could get improvements. For example, the cabin is a bit bland and could use more luxury. On the outside, some minor changes to improve the handling and stability could be useful. Under the hood, things could get interesting. A lot of electrification is happening around the market. So it wouldn’t be a complete surprise if the new Ranger went with a battery pack instead of a traditional engine. Let’s read in more detail what is to come with this redesign.

On the inside, there are some changes coming Ranger’s way. The 2024 Ford Ranger will have an improved cabin and we are thrilled at that news. Seating will get more cushioning and some extra nice features. Such as massaging features and heated and ventilated seats. This will come in handy, especially during off-roading ventures. Comfort is important and Ford delivered on this one. There will be a central infotainment system, hopefully, no less than 13 inches in size.

The cabin can seat 5 people with plenty of legroom and headroom to spare. Safety features are plenty. We get our standard forward collision alert, lane departure alert, automatic brakes, cameras, and sensors all around for easier parking. Hands-free driving will be present. The so-called, BlueCruise is Ford’s own software for hands-free driving. It has over 200 000 miles of pre-mapped interstate roads. Perhaps this version will have even more. 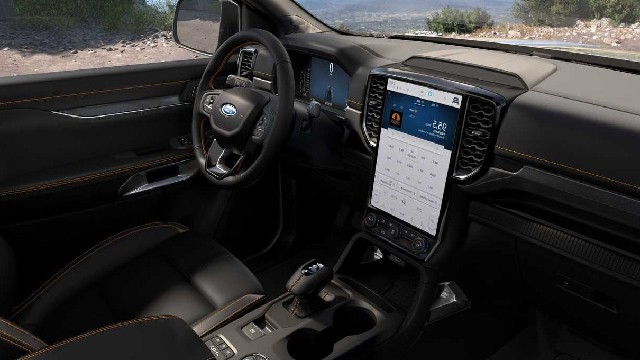 There won’t be any drastic changes coming our way on the outside of the 2024 Ford Ranger. The legendary look will continue as it is. We get our standard 5.5 feet cargo bed. Commendable ride height with over 8 inches of clearance. Bumpers are prominent and have a good approach angle. This will come in handy with obstacles under you. The front mesh is wide and tall as every Ford has one like this. This will cool the engine even in the harshest conditions.

Winch capability is not present at the moment but perhaps on some trims, it does arrive. We get huge 20-inch wheel rims that are made from lightweight material. This shaves off some weight and improves the power-to-weight ratio. The hood looks a bit with all the curves. But overall the Ranger has the classic blocky look but with some aerodynamic features. 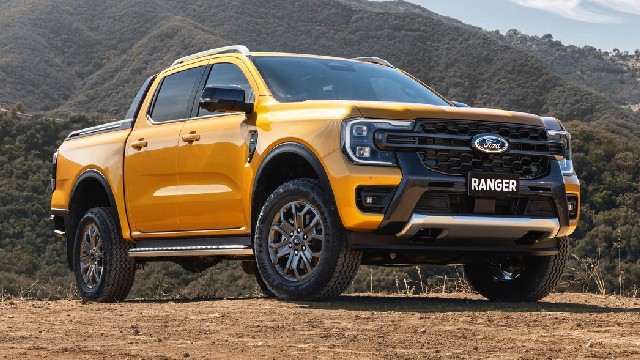 Per reports, some changes are bound to happen with the 2024 Ford Ranger. So far we have several engines confirmed for the powertrain of the Ranger. First up is a 2.3-liter turbo four engine. It produces 270 horsepower currently. The redesigned pickup might receive an updated version of this engine. With few tweaks, it should give upwards of 300 horsepower. There is also a high-power Raptor version for the Ranger. This is the first time this will happen on the North American continent. It will run on a 3.0-liter twin-turbo V6 engine. This maxes out at 392 horsepower and 430 pound-feet of torque.

More than enough for a mid-size pickup. Hybrids and electric trucks are quite popular nowadays. Every manufacturer is running to make theirs. These are somewhere down the line when it comes to Ranger. But what would it look like if the 2024 Ford Ranger was a hybrid or fully electric? A hybrid powertrain does have a lot of benefits to it. For starters having an electric motor or two to help the engine can get you better fuel economy. Also, it gives more horsepower. On top of that, electric motors can run on their own on average for 40miles each. So there is that if you run out of fuel by accident. Fully electric trucks are possible, and by who other than Ford?

The F-150 Lightning has a great range and amazing capabilities with towing and hauling. Horsepower and torque are top of the class. It sounds like this architecture would work perfectly in a Ranger. Perhaps we could get a bigger battery pack for more power and even more mileage. Let’s say 150kWh to 200 kWh would be the sweet spot. Perhaps it is too far down the line for the 2024 Ford Ranger to be electrified. But one thing is for sure, Ford is missing out on a lot of sales if they stay with a combustion engine exclusively.

The brand new 2024 Ford Ranger is quite thirsty. Its fuel economy is 30mpg combined for the 2.0 engine. The bigger 3.0-liter turbo diesel V6 gets 28 mpg combined. This would be helped a lot if Ford actually rolls the Ranger out with a hybrid powertrain. One can only hope.

Starting price for the basic trim of the 2024 Ford Ranger will be $25000. If you are looking for something more specific, Ford has you covered. For example, for those looking for a bit more luxury in their truck, we have Ranger Lariat. And for those who prefer to go wild off-road we have the Ranger Raptor. Both will be well over the $40000 mark. Expect to see the new Ranger in the summer of 2023.