Fans are wondering whether it is time for Ford to do a bit of remodeling and bless us with the all-new 2023 Ford Super Duty. The answer is an absolute yes. And we will be getting a treat with the 14th generation of the world’s best-selling truck. Some readers might wonder what Ford Super Duty is.

To put it simply, it’s the biggest and coolest among the Ford truck line. Best suited for heavy towing and transporting big loads, the 2023 Ford Super Duty is sure to turn some heads with its new look and its performance as well.  Let us take a deep dive into all the changes we are going to see when Ford unveils their newest creation. 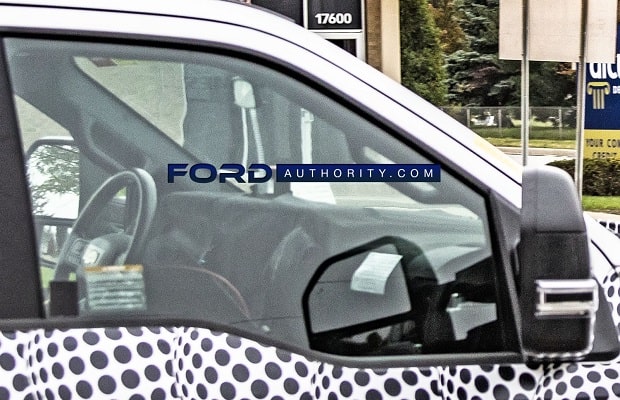 These exclusive and fantastic spy photos are taken from fordauthority.com.

There probably isn’t going to be anything too impressive on the inside of the 2023 Ford Super Duty truck. Expectations are that the interior is going to resemble or be the same one as in the F-150. Ford has been selling the current version of the Super Duty since 2017 and decided that it is time to change things up. And we couldn’t be happier about it honestly.

There are of course going to be several trims available. The difference is probably going to be the materials used on the inside, the number of gadgets and technology available, and also how many doors you wish to have. There are going to be 2 cab versions available. And the interior should be able to sit five people comfortably no matter which trim is chosen. There will be different clothes and leather upholstery with various color schemes.

Expect nice soft feel plastic and not cheap plastic on the dashboard and the steering wheel. There are rumors about a Platinum edition of the 2023 Ford Super Duty pickup truck. Expect the manufacturer to go all out on this one. This can only mean leather seats, chrome on the dashboard, a lot of gadgets you wouldn’t get with other trims. There should be a central infotainment system which will also serve as the central control for air conditioning and similar settings.

It will have good connectivity, Apple CarPlay and Android Auto are available and should be more than enough, also Bluetooth is kind of standard at this point. There are rumors about a high-quality surround system but we have no official confirmation as of yet. 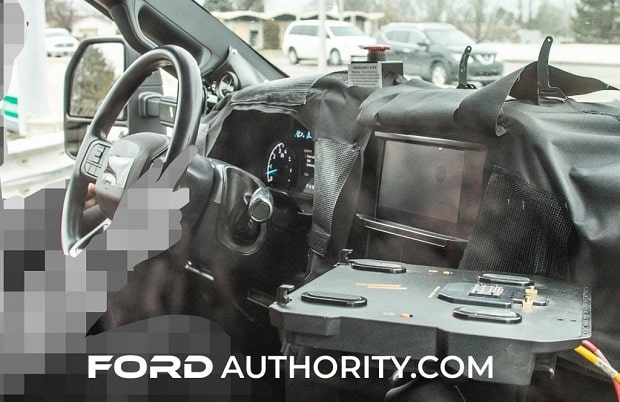 On the outside, things are also going to change a lot. The manufacturer isn’t trying to save money on the exterior and they pulled all the stops to make it look modern and aggressive. The 2023 Ford Super Duty will get a complete redesign on the exterior so let’s see how much things are going to change. Many fans complained about the current version of lights. The shape was outdated and there were also complaints about bad visibility due to bad design.

So look out for Ford to change up the design and put some stronger LED headlights to enable better visibility during night and also to use some modern shapes. Square or anything other than round lights would suffice. We heard that the 2023 Ford Super Duty will be getting a bigger front grille, hopefully, chrome to make it dashing and modern. This also means bigger air inlets to cool the engine in a more efficient way. This will make sure there are no overheating problems with the engine during those long hauls.

Certain photos began to circulate the internet. The test run was photographed and we can see all-black wheels. While this is modern and looks great on a big truck, we were hoping for more. Perhaps aluminum alloy wheels to shave off some weight off the already fat truck. This could improve the power to weight ratio which this truck desperately needs and also look modern.

Also in those photographs, it appears the 2023 Ford Super Duty has more ground clearance. This might be due to new springs. The overall shape of the car is unchanged except now it has more angles and looks less blocky. This is a sure way to make it fit with other modern cars on the road. 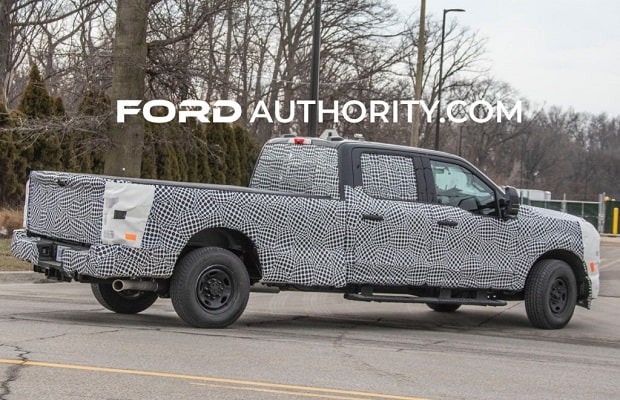 This is where it gets interesting. The all-new 2023 Ford Super Duty is still a beast in its own class when it comes to what is under the hood. The manufacturer is still going to use absolute units of engines to give power to this gargantuan. We expect the 6.2-liter V8 engine to be used in the basic version. This engine can push around 380 horsepower, which is big. And produce up to 430-pound feet of torque to get you out of tight spots and to enable hauling even in the most difficult terrain.

There will be an option to put a 7.3 liter V8 in your 2023 Ford Super Duty which can produce the same torque but 430 horsepower.

Also, there is a turbo-diesel version of the 6.6-liter V8 which spins up to 475 horsepower and over 1000 pounds of feet toque. Talk about overkill.

When it comes to heavy hauls, you can put 7500 pounds on the truck and it will transport it with ease. When you need to tow something big, Ford won’t disappoint there either.  It can tow up to 24.000 pounds easily. 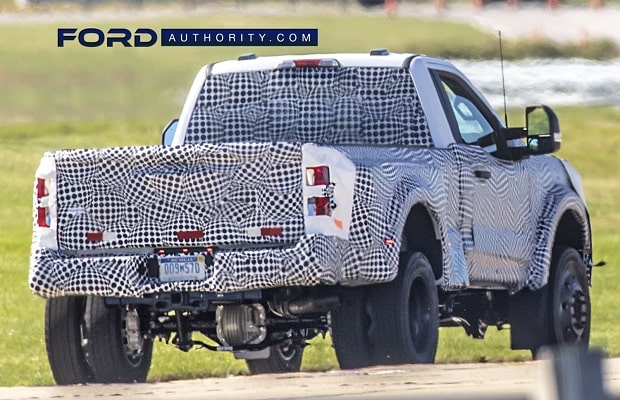 While there are rumors about the 2023 Ford Super Duty having hands-free driving, nothing is yet official. We are sure there will be driver aid software to get drivers out of dangerous situations and save some lives. Ford is heavily investing in safety. Expect this giant of a truck to hit the shelves sometime late in 2022, summer probably.

The current version of Super Duty is going for $37.000, and we don’t expect a big change-up. Of course, things could get pricy for better trims or the Platinum version, prices could shoot through the roof and go up to $70.000. This might put it in a difficult spot to compete with Silverado HD and RAM HD Pickups.