Big pickups might not be top sellers, but the new 2023 Chevy Silverado is a head-turner. The biggest portion of pickups is present in the mid-size pickup category. This is due to them being quite versatile and able to do many things. Towing, hauling, off-roading, and then some while looking stylish and sleek. They are good options for everyday agendas and as a regular workhorse. But full-size pickups, like the Silverado, have a niche to fill. They must be powerful and well-performing. But being stylish and looking good while doing it can only help their case.

The big Chevy recently received a much-needed update. It concerned the interior and exterior. There were some style upgrades, some functional improvements as well as better technology on the interior. The exterior did receive a change, however, it is not something drastic. Mostly minor tweaks that help with handling and steering, and looking aggressive. The powertrain lineup is amazing and there are some gems under the hood. There were updates to engines as well. However, no electric version as of yet, even though it was speculated to happen. Let’s take a closer look at the new Silverado.

The Silverado may be set up in a variety of ways, from the bare-bones Work Truck variant to the luxurious High Country. Simple necessities like manually adjusted frontal chairs, manual doors and windows, and leather seats are all that are offered in base versions.

But beginning with the LT level, the inside is noticeably sexier thanks to a more attractive dashboard with a 12.3-inch digital meter cluster and a sizable central touchscreen. The leather seating and open-pore wooden trim in the interior of The High Country make it very attractive. Although the rear seat in the crew cab is spacious and has plenty of height, the upholstery is a bit uncomfortable. 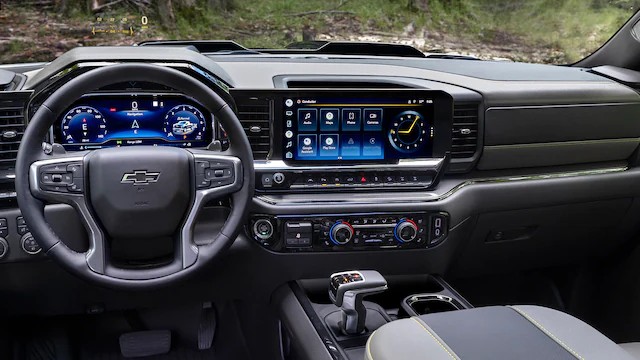 There will be several engines on offer for the updated 2023 Chevy Silverado. Although they are familiar, they are actually brand new and updated. Chevy took the old engines and gave them much-needed updates to make them more capable and powerful. There is a plethora of powertrains, including a turbocharged four-cylinder, two V8 engines as well as a Duramax diesel powertrain. This wide range means that there is a Silverado for every opportunity. The stronger of the eight-cylinder engines is a 6.2-liter monster with 420 horsepower and 460 pound-feet of torque. This is quite enough for the full-size pickup. It will come in handy off the paved road.

This one is also the fastest engine in any Silverado, it reaches 60mph in 5.4 seconds. That is blazing fast for a big pickup, such as Silverado. There is also a smaller 5.3 liter V8 with 355 horsepower which is also commendable. But it is a bit slower as well, it reaches 60 in just 6.1 seconds. There is a 2.7 turbocharged four-cylinder engine with 420-pound feet of torque. But we have to say that the diesel engine is impressing a lot of drivers. There is usually a lack of diesel powertrains with trucks, due to upcoming emission regulations. They are becoming more and more strict which doesn’t make it easier to keep them running. But nevertheless, Chevy decided to include a diesel powertrain which will make everyone happy. It is the slowest of the bunch, but it has smooth shifting and is very quiet even at higher revs.

This is a 3.0 Duramax inline-six engine that is 3.0 liters and can produce 305 horsepower along with 500 pounds-feet of torque. This extra torque will come in handy with towing and driving on difficult terrain. Although it is a full-size pickup, it is very nimble and agile. During test drives, it was reported that the new Silverado acts agile and has amazing handling and steering. A serious hauler, the half-ton Silverado has a maximum towing capability of 13,300 pounds. The Ram 1500’s maximum towing capacity is beaten by 550 pounds, while the F-150’s is 700 pounds lower. The 6.2-liter V-8 Chevy engine offers the highest towing capacity, but the 5.3-liter engine can still tow up to 11,500 pounds. Models with a turbocharged four-cylinder engine have a 9500-pound towing capacity. As far as the pickup’s capacity is concerned, which varies between 1870 and 2280 pounds, the powertrains are less important. 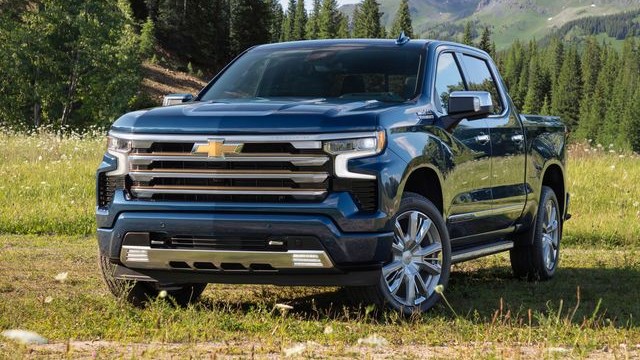 A vastly improved engine, the 2.7 turbo produces 310 horsepower and 430 lb-ft of torque. The 2.7-liter was enhanced in part because of a reworked engine block and crankshaft. Other changes have improved the efficiency and smoothness of this powerplant. According to General Motors, it can achieve up to 22 highway mpg. Strangely, GM decided to use its eight-speed automatic transmission rather than its ten-speed transmission to mate this engine. 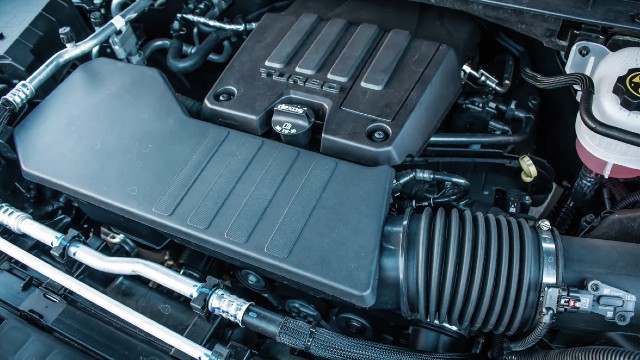 Our real-world testing shows that the Silverado’s most economical engine, the turbo four-cylinder, was actually less efficient than the 5.3-liter V-8, all-wheel drive powertrain, which getst 16 mpg while driving in the city and 22 mpg during highway drive. In our testing, the V8 delivers 21 mpg while the turbo-four returns 18 mpg. The 6.2-liter V-8 provides city/highway estimations of up to 16/21 mpg; but, in our real-world highway test, it also demonstrated amazingly low fuel consumption when compared to the turbo-four, averaging 19 mpg. Visit the EPA website for more details regarding the Silverado’s fuel efficiency.