Chevy Silverado is the second best-selling vehicle in the USA, right behind the undisputed Ford F-150. However, in the period when a large pickup market is growing, its sale has dropped down by 0.5 percent. This is one of the reasons why GM is investing almost $3 billion in facilities in Michigan, Indiana and Mexico where the next Silverado and Sierra will be produced.

GM’s engineers and designers are working hard to prepare new 2019 Chevy Silverado for its debut at Detroit auto show next month. However, they prepared a great introduction before its official debut last Saturday. On the 100th anniversary of Chevy Pickup Trucks at Texas Motor Speedway, president of GM’s North America operations, Alan Batey has presented new Silverado LT Trailboss.

The LT Trailboss will be one of the eight trims of the new Chevy Silverado. This specific model will be equipped with a two-inch lift kit comes standard which is fully tested and certified by Chevrolet. Also, complete Z71 equipment comes as standard. It is obvious that this model will be more popular among off-road drive lovers.

Even though only off-road of the new 2019 Chevy Silverado was officially presented other trims will have similar design too. The design of the Chevy Silverado’s fourth generation will be significantly different compared to the current model. The bodyside will be more refine sculpted with less angular appearance. The bonnet will be more aerodynamic and also a slight slope in the roofline can be noticed. All of this will contribute to better performance. The grille still dominates the front end of the truck paired with minimalist LED headlights. It has big air intake with two horizontal bars with the Chevy logo in the middle. On the rear side dominate dual chrome exhaust tips and massive black bumper. 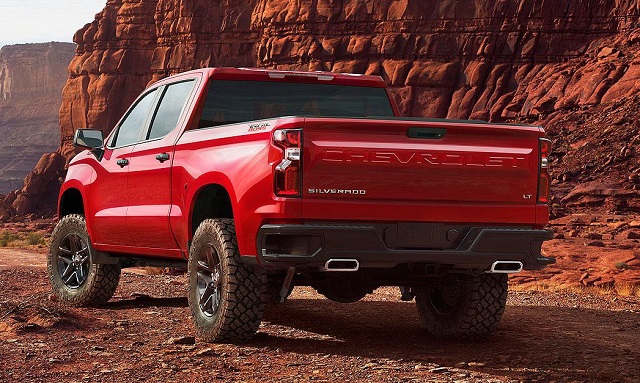 When it comes to powertrain Mr. Batey was very mysterious. He didn’t give any information about the engine under the 2019 Chevy Silverado LT Trailboss’s hood. Presumptions are that a 6.2-liter V8 engine will be the one and that will be matched with a 10-speed automatic transmission. However, he has mentioned that the new Silverado will offer more engine options, improved technology and convenience features inherited from its predecessor. Also, lightweight materials will be used which will additionally help to improve truck’s performance and reduce fuel consumption.

More precise information related to the new Chevy Silverado will be available in January when its debut is scheduled. So far, reactions to the new design are great. If GM also offers good performance with that, the new Silverado could easily overshadow the popularity of the Ford F-150.