Ford F-450 falls in the blue oval’s Super Duty family, and its first model was started in 2005 to reduce the gap between F-150/350 and F-650/750 variants. This vehicle has been quite popular that has got other companies thinking. Chevrolet is allegedly planning its own pickup truck in this class. Several websites and magazines are replete with speculation that new model named 2018 Ford F-450 is almost ready. Ford has already done a great job with its Super Duty trucks so we don’t expect anything less from the upcoming one. 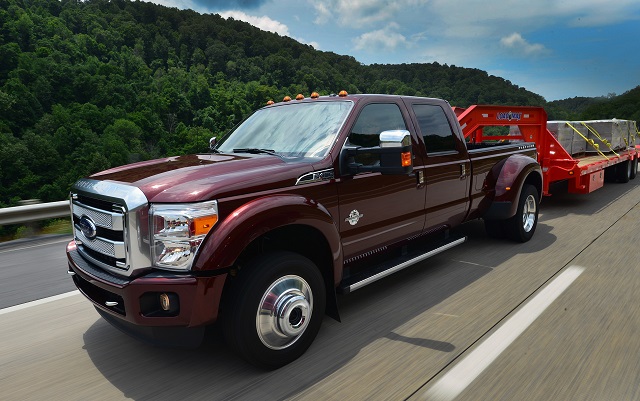 When it comes to powertrain, Chevy needs to up its game since Ford is known for equipping its trucks with high power diesel units. The 2018 Ford F-450, for example, will have a 6.7-liter V8 mill. This is the only variant that has been used in Ford’s F-450 line of trucks and why not? It is capable of producing 440 hp and a massive torque of 925 lb-ft. Now Ford F-450 will come with a standard four-wheel drive platform. A rear wheel drive variant will come as an optional.

Chevrolet, therefore, are trying to get a 6.6 liter Duramax engine, the same one that they use in luxury cars Chevrolet Silverado HD and GMC Sierra HD. This is an impressive engine too, capable of churning out 445 hp of power and torque upwards of 900 lb-ft.

Ford’s aluminium strategy has been in full force since 2015, and it will be no different for their future vehicles as well. 2018 Ford F-450 will have much aluminium in its body and hence will be lighter. Chevrolet is still going with its dominant steel strategy since it does not want to shock its customers at this moment. Sudden aluminium does affect sales a bit, something Ford had experienced earlier. However, Ford knows what it is doing and is way ahead regarding towing capacity, a whopping 31,200 pounds, which is far more than what Chevy are willing to offer.

EPA ratings need to be good to keep with the strong emission standards which are being suggested by federal bodies. This has mainly been the reason why Ford has taken aluminium so seriously. It has enabled them to have a combined fuel economy of 15 mpg, a good number for a pickup truck.

What design F-450’s competitor will wear is far from clear since General Motors and Chevrolet have kept their plans under the carpet till now, but Ford has been forthcoming about letting everyone know what to expect from his or her upcoming vehicle.

F-450 has been integrated with aluminium, using to construct its body panels and inner linings. An attractive aerodynamic design is also in the offing for this medium duty truck. New LED headlights will brace the front fascia while a dual tone paint makes it a bit more attractive.

On the inside, it will have many features that will be enough to make customers turn and look. Some of them are:

2018 Ford F-450 will be released sometime during the end of 2017 and do not expect a cheap price tag. Base models will start from around $53,000 while higher trims levels will inevitably cross $70,000. With the features available, do you think that customers will spend that much? Only time will tell. Till then Chevy needs to up its game.